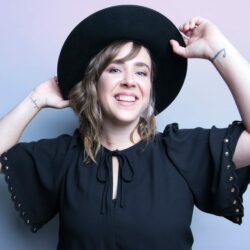 Serena Ryder is a Canadian singer-songwriter who first gained national recognition with her ballad “Weak in the Knees” in 2007 and has released eight studio albums. Ryder released Harmony on November 27, 2012. The first single “Stompa“, co-written with Bettis, was used in an episode of ABC television’s Grey’s Anatomy, quickly climbed the charts, and became certified platinum in January 2013.