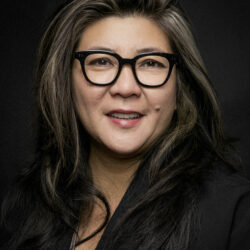 Ana Serrano joined OCAD University – Canada’s largest art and design university – as President and Vice-Chancellor on July 1, 2020. An innovator and global visionary leader in digital media, Ana has a strong sense of the value of art and design education and research coupled with a record of success effectively managing financial resources and high-performing teams. She has also been an adjunct professor at OCAD U, advising students in the Digital Futures graduate program, and led the formation of the Canadian Film Centre and OCAD U partnership that began in 2011.

Before coming to OCAD U, she was the Chief Digital Officer of the Canadian Film Centre for close to 10 years. Recently, she launched ideaBOOST, Canada’s first digital entertainment accelerator, with founding partners Shaw Media, Corus Entertainment and Google.