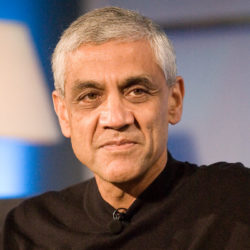 Vinod Khosla is an Indian American billionaire engineer, businessman and venture capitalist. He is a co-founder of Sun Microsystems, and the founder of Khosla Ventures. In 2014, Forbes named him amongst the 400 richest people in the world. He is well-known for a failed decade-long legal battle to overturn the California Coastal Act and privatize Martins Beach.