Elevate Festival is Back! Take advantage of early bird savings. Get Tickets 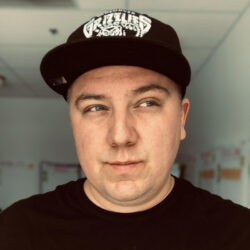 Ryan McMahon is an Anishinaabe creative who jokes, talks, yells and writes for a living. McMahon is originally from Couchiching First Nation in Treaty 3 Territory and was born and raised in Fort Frances, ON. He splits his time between Toronto and Winnipeg.

McMahon is one of the most sought after Indigenous creatives in North America.

Over the course of his career, Ryan has established himself as a sharp and prolific comedic voice, a trusted Indigenous journalist and media maker, a writer with a sharp pen and a critical lens, and a vital and critical cultural thought leader in North America.

Ryan’s body of work is irreverent, boundary-pushing, and forward-looking as it investigates the good, the bad and the ugly between the collision of Indian Country and the mainstream.