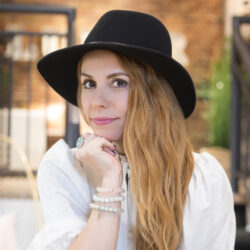 Rhiannon Rosalind is a serial entrepreneur and social innovator, best known as the President of The Economic Club of Canada for over a decade.  On her podium, the highest-profile and most recognized in Canada, she has hosted some of the most relevant speakers of our time. The likes of President Barack Obama, Michelle Obama, Amal Clooney, former U.S. President Bill Clinton, and former President of France Francois Holland have all graced her stage. Rhiannon is the youngest woman in Canadian history to be inducted into the Most Powerful Women in Business Hall of Fame. She is the founder of Lunar Club – where she shakes things up by interviewing some of the most powerful feminists in Canada. She is also the founder of The Jr. Economic Club of Canada a non profit that has delivered educational programs to over 50,000 young people across Canada and delivered summer camps for reconciliation between indigenous and non indigenous youth across the country. She is Founder and CEO of Conscious Economics – a new economy platform dedicated to creating systemic change through mindfulness, financial therapy and art to drive more equitable business outcomes.  She is an advisory board member to the Ted Rogers School of Management MBA. Rhiannon is also the proud mother of two young boys, Luke and Bennett, and enjoys exploring Toronto with them in her spare time.