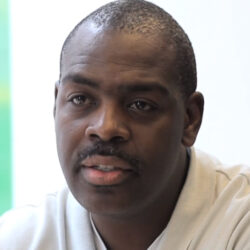 Nicholas Davis is an accomplished journalist and writer. He’s currently the Executive Director of Equity and Inclusion at CBC. Previous to that he was Manager of Program Development for CBC, where he was responsible for the ongoing development of local programming in radio, television and online.

Nick has worked in radio, television and print for the past 33 years covering everything from current affairs to the arts. He has won many awards for his journalism, including a 2006 Gabriel for a story he did on Holly Jones. He’s worked at CBC for the past 23 years as a reporter and producer — most notably as Senior Producer for Metro Morning, where Nick was part of the team that made the program the number one morning show in Toronto.

Nick has published and edited magazines, been a crime reporter, hosted TV and radio programs. He has covered two Olympic Games (Nagano and Sydney) and has taught radio skills to new journalists across the country for CBC. He’s also lectured on journalism at Ryerson University, Seneca College, Sheridan College and Centennial College.