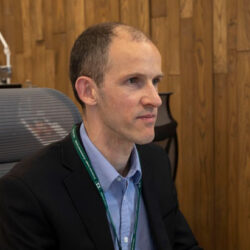 Nathan Gillett holds a PhD in atmospheric physics from the University of Oxford. After his doctorate, Nathan worked as a researcher at the University of Victoria on the attribution of climate change, before being appointed to a faculty position at the Climatic Research Unit of the University of East Anglia in the UK. In 2008, Nathan returned to Canada to work as a research scientist at Environment and Climate Change Canada’s Canadian Centre for Climate Modelling and Analysis. From 2014 to 2018 he served as manager of the centre, overseeing the development and application of Canada’s earth system model. From 2018 to 2021 he co-led the chapter on human influence on the climate system of the IPCC Sixth Assessment Report, as a Convening Lead Author.