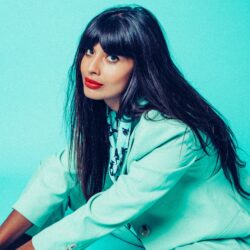 Jameela Jamil is a one-of-a-kind multi-hyphenate. In 2009, an English Teacher at the time, she was picked from obscurity to host the British breakfast TV program Freshly Squeezed where she went on to become a favourite weekend and weekday morning face for the station T4. In 2016, Jameela made her move to United States television where she was cast by Mike Schur to portray the role of Tahani on NBC’s critically acclaimed The Good Place. Currently, she is host of The Misery Index.

A passionate advocate for many causes, in 2018, Jameela launched a movement and social media platform @i_Weigh which encourages women to feel valuable and look beyond the flesh on their bones. The movement has been recognized by both media outlets and the movement’s hundreds of thousands of followers over the world.

In Conversation with Jameela Jamil