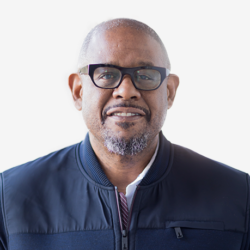 Forest Whitaker is an American actor, producer, and director. He is also an advocate of Sustainable Development Goals appointed by Secretary-general of the United Nations.

In 2012 he founded The Whitaker Peace & Development Initiative (WPDI) to promote the values of peace, reconciliation, and social development within communities impacted by conflict and violence.