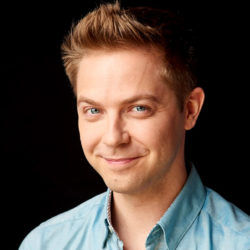 For SPACE he co-hosted the beloved, CSA nominated, series InnerSpace, for which he travelled the world covering gaming, film, television, science and tech, comic books, and everything in between, garnering recognition across Canada.

Since returning to Earth in the spring of 2018, Ajay has been live-streaming regularly on Twitch, as well as working with Xbox, Nintendo, Best Buy, The Canadian National Exhibition, and regularly guest co-hosting Heads Up Daily & Squad.